In French, when a word ending in a normally silent consonant is followed by a vowel or h muet, that consonant might be transferred onto the next word. This euphonic technique is called a liaison and it’s one of the aspects of French pronunciation that can make it difficult to determine where one word ends and the next begins.

Certain consonants offer a further complication: they change sound. The normally silent s at the end of vous is not pronounced [s] in a liaison, but rather like [z]. Other consonants have similar changes – see chart. ==>

As if that’s not enough, some liaisons are required, others are optional, and still others are forbidden. Just because a normally silent consonant is followed by a vowel or mute h does not automatically mean that a liaison must or even can occur. The rules for when and why to pronounce liaisons are fairly complicated and have to do with linguistics and register – I’ll explain this in more detail in a future lesson.

Liaisons are not the same thing as enchaînement – see the comparison at the end of that lesson. 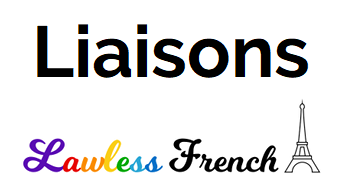